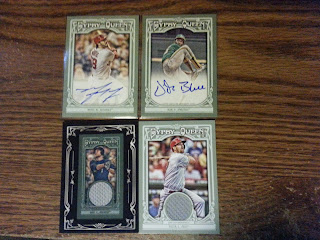 Box two ended up being much better than the first one. No dupes in box two, and both boxes together leave me 32 cards from the 300 card base set. I got my 6 SP's per box leaving me 38 cards away from the 50 short prints. Oddly enough I got the same four Gloves Stories and No-Hitters as in the first box, giving me doubles of each.

My autographs were better with Michael Morse and Vida Blue, the Nationals and A's are my number 2 & 3 behind Colorado so they kind of fit into the collection, but I would trade them for Rockies autos. The relics were just a disappointing as the first box with Scott Rolen and Corey Hart. I am not sure if Rolen is part of the active player part of the set or the classic players (because he is old you see, it's kind of a joke). The coolest part of the box was pulling a yellow printing plate of Torri Hunter, the first plate I have pulled from a pack. Printing plates are not going for huge money on the secondary market, so I might hold on to it was trade bait for a bit. 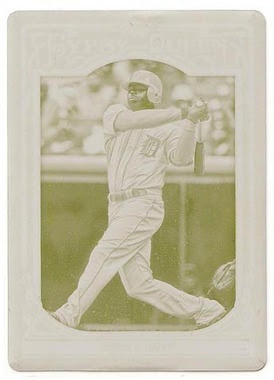 My want and tradelist will be up soon, if anyone is interested in swapping some cards.
Posted by Rosenort at 12:52