How to spend 1,600 Imaginary Dollars

A pretty interesting contest over at Drop the Gloves asking what you would buy if you had $1,600.00 to blow on eBay. As someone who is on a tight budget and is mostly limited to lower end cards, this is kind of a fun little time waster.


1) 2007-08 Upper Deck Trilogy Ice Scripts Bobby Orr ($170.00 / $170 Total)
In my biased opinion as a Bruins fan, Saint Robert is the best Hockey player ever when you consider what he did as a D-Man and in the era that he played. It would have been amazing to see what he could have done with good knees and a couple more healthy seasons. I do have a Bobby Orr autographed puck, but I still don't have a certified auto card. Not the most expensive Orr auto around, but my love for clear thick plastic cards makes this a easy pick.

2)  1984-85 OPC Cam Neely PSA 10 ($430.00 / $600 Total)
My copy of this card is not bad, but a PSA 10 would be too nice to pass up. Neely was my favorite player as a kid and the first and still largest of my player collections. Neely retiring was a big part of why I fell out of love with hockey. (Oddly enough this card sold as I was finishing editing this post, but I will still include it)


3) 2007 UD Premier Autograph Troy Tulowitzki ($150 / $750 Total)
A nice looking autograph showing Tulo in his rookie year number 14 jersey. For some reason I am drawn to cards that show the player name and number on their jersey, especially so when it's an unfamiliar number like this one.


4) 1971 Topps Lee May PSA 9 ($200/ $950 Total)
My favorite set of all-time and these black bordered beauties are the inspiration for this blog's name. I always wanted a high graded card from this set and the nice in-game shot sold me on this card. 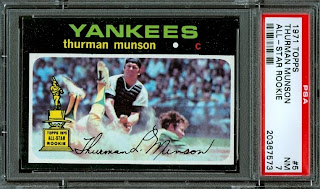 
7) 2011 Gypsy Queen Sealed Box ($250 / 1545 Total)
You didn't think I could have a post this long without a Gypsy Queen appearance, I still need a pile of base card to complete the set and a full box would go along ways toward completing while giving me some a chance at some hits and trade bait. 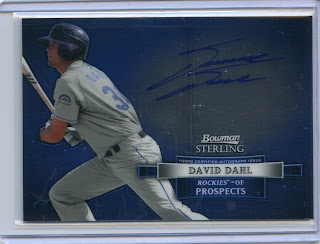 8) 2012 Bowman Sterling David Dahl Autograph ($50 / 1600 Total )
A top tier prospect for the Rockies taken with the 10th overall pick in last years draft. A player that "prospect prospectors" have been scooping up cards of putting them out of my price range. A center fielder that hit .379 as a 18 year old in rookie ball last year, reportedly has the tools to be a star for Colorado in a few years.