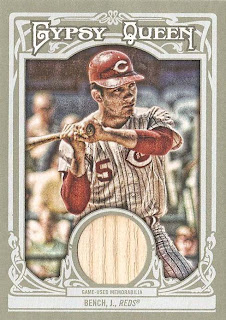 Updating an almost forgotten project, collecting bat relics of the top home run hitting catchers of all time. Johnny Bench held the record with 327 until it was broken by Carlton Fisk and later by Mike Piazza. Bench does have more total career home runs than Fisk, but I am going by home runs hit as a catcher. This pick-up puts me at 7 of the top 10, with Yogi Berra next on the list.
Posted by Rosenort at 13:10