A Couple Thoughts on 2013 Archives

I like the Archives line, as someone who enjoys custom cards, that's basically what this set is and as a Rockies fan it's interesting to see how Topps handles cards of players whose teams didn't exist when the original sets came out. I also love the return of the acetate Gallery of Heroes inserts, while I have yet to land one of these, early scans look pretty damn good. The 1983 All-Star inserts and Stadium Club Triumvirates look good as well and are a nice inclusion to the product. The autograph checklist doesn't do much for me other than Mickey Tettleton, and Ellis Burks as a Red Sox and not a Rockie is a little disappointing, but Archives never uses retired Rockies so no big surprise. The Heavy Metal autographs are a joke, first off, save the non-sports crap for Ginter, secondly the checklist is all Glam Rock other than Scott Ian, I'm sorry, but when I think of Heavy Metal, I don't think of Kip Winger, how about a Tom Araya auto? My biggest problem with Topps right now, and this set is terrible for it, is the re-used photos (this was pointed out by Sportscards from the Dollar Store linked here.), All 4 Rockies cards have previously used images, and it really didn't take that long to find them. 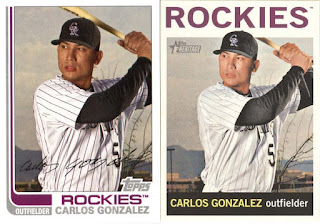 2013 Archives and 2013 Heritage, not even trying that hard, same photo, same dead tree as the past two seasons of Heritage, and the facsimile auto looks nothing like Cargo's oOo6 signature.

At least these are not all base cards, but this photo has at least been used three times, 2013 Archives, 2012 Triple Threads and 2012 Five Star 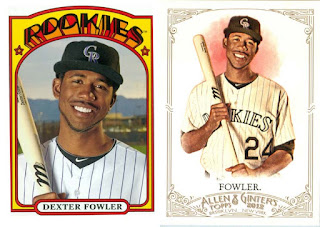 A different crop, but the same photo, looks to be from the 2012 Heritage dead tree photo shoot that was reused for 2013 Heritage as well. 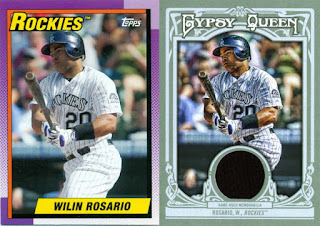 As an added bonus, obviously the only known photo of Yogi Berra.
Posted by Rosenort at 12:02