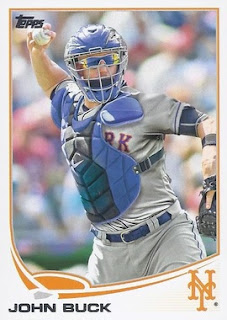 Something I have been meaning to do for a while is to break down just the catcher cards from sets, it's something I do anyway, I am just taking the time to post it now. I am leaving out cards of catchers batting, so no Evan Gattis, just cards that might land in the catcher binder. Starting off with John Buck, Buck is the only catcher allowed to custom paint his mask. This card does a poor job of showing it, a major disappointment for me considering how awesome his 2011 Topps card was. 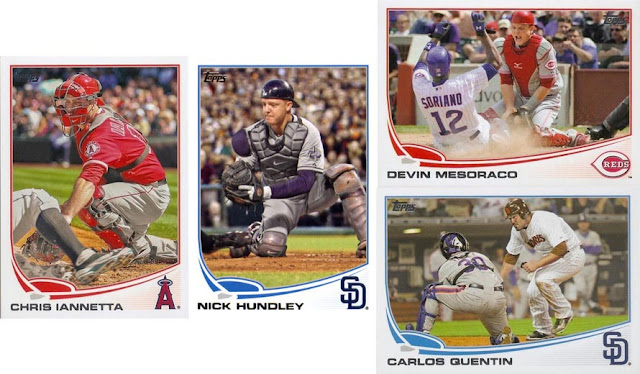 A few "Play at the Plate" cards, Iannetta is one of the few mask on cards in series two. Mesoraco is either trying to tag out Soriano or eat his soul, I'm not sure which. As a bonus we have Carlos Quentin getting ready to likely flatten Josh Thole.

I noticed a lot of horizontal cards in this set, but the catchers didn't have many, although the Wellington Castillo is the highlight of the set for me.

The majority of the cards are of the "mask off, probably fielding a bunt" variety, not a lot going on with these cards other than the Rookie Cup on the Rosario.

Four pretty boring cards right here, Sanchez does have a goalie style mask, but not a great shot of it.

More "mask off cards" and another Play at the Plate staring Erik Krantz' receding hairline.
Posted by Rosenort at 15:18