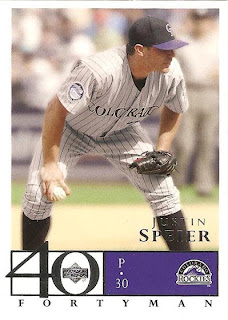 Just 4 cards from Sportlots, but three of them are from my most wanted list. Justin Speier and Chris Richard are pretty obscure guys for the "One of every Rockie" project, which will be down to just Aaron Ledesma once and incoming comc order arrives. Actually, Speier was a pretty valuable reliever, pitching in 177 games over three seasons with Colorado, going 12-5 with a 4.04 ERA and saving 9 games in 2003.

Rob Johnson played in parts of 2 games in 2003, the last year of the disaster that was the Steve Spurrier era. The shipping price jumped after 4 cards so finishing of the order is a random Sean Taylor I didn't have, from the 2007 Select set, produced by Score.