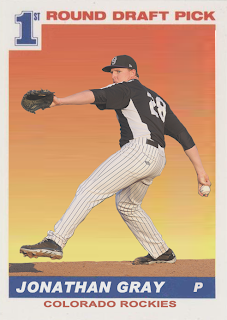 1991 Score was probably the first set I collected a large amount of cards of, most of the earlier sets in my old boxes are smaller piles, but 1991 Score if the first big stack. In tribute to 1991 Score here is a custom of 2013 3rd overall pick Jonathan Gray. Gray is arguably the most impressive pitching prospect with the highest ceiling in Rockies history. The scouting reports are enough to make a Rockies fan drool, especially after the Greg Reynolds disaster. After making his pro debut earlier this month, I would expect Gray to be heavily featured in the year end Bowman products.
Posted by Rosenort at 10:22