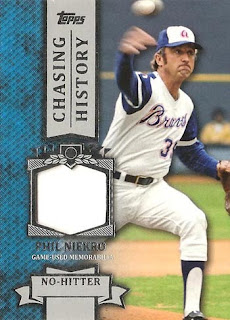 Kind of a weird box break as I didn't actually break this box myself. This box was won as part of Beckett's Box Busters Live after it was opened on a live stream. So a huge thanks to Beckett and Chris Olds for the cards. On to the review.

I used to hate Series 2, I hated that players that have spent the entire season with their new teams were still airbrushed, I hated that players that have moved on to new teams were still shown with their old ones, and I hated that a large part of the checklist has already been seen in either Opening Day or in the packaged "Team Sets". Of the 13 Rockies cards in Series 2, 12 are from the team set and 2 of these were also in Opening Day. The only new card is Ryan Wheeler, who is Photoshopped into a Rockies uniform. Chris Nelson is present in the Rockies set and hasn't been with the team since he was DFA'd on April 28th and has signed with and been cut by both the Yankees and Angels since then. Missing is Jon Garland who made the Opening Day rotation.

But those things don't really bother me anymore, I have come to terms with what Series 2 is. It is not an update to Series 1, it is Series 1: Part 2. As much as I would love a mid-season update set to bridge the gap between Series 1 and Update, which are released about 9 months apart, Series 2 is not that set. Once I came to that realization, I was at peace with Series 2.

What Series 2 does is continue on where Series 1 left off, with a solid base card design that is honestly one of my favorites of the last 20 years, and the photo selection makes for some great base cards. The parallels work very well with the design, even if some of the color choices are questionable. While I hate the 1972 Minis for both the awkward size and design, the rest of the inserts are great. The "Chasing it Down" inserts are gorgeous, as are "The Elite" on high end, thicker stock. The "WBC Stars" checklist is smaller than I would like, but the inclusion at all is appreciated.

I was also impressed at getting zero doubles in the box, leaving me very close to the base set. Overall, this product comes across as a quality release, and not just because these cards were free, but because it won me over as a former Series 2 hater.

Here is a breakdown of the box: