A combination of some extra cash laying from a contract job and a sale at Blowout obviously equals buying cards. Nothing crazy exciting, but it's always nice to open some packs, get some new keepers and traders, and have something to show off here. Starting with probably the least exciting, a hanger pack of 2013 Update. I always like Update and the real draw here was the chance at pulling a Nolan Arenado rookie.

The inserts were pretty gross, D-Backs and Dodgers, yuck. Although I needed the Musial for my 1971 style collection. 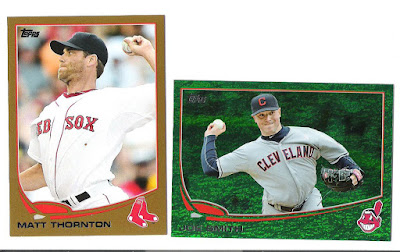 I didn't really know what was in a hanger pack, but I was hoping for more then 2 parallels. The emerald one is sharp, but doesn't really work with the Indians colors. Also a throwback to simpler days with the Chief Wahoo logo before the world went crazy and everyone crapped their pants over a cartoon baseball team mascot. Some keepers from the base set, this is why I like update, cards of middle relievers, I already had the Peralta, but the fake throwback jersey is too awesome not to post. 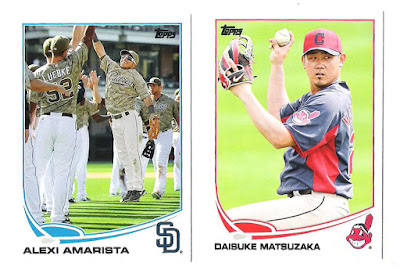 Full points on the photo choice for the Amarista and bonus points for the camo uni. Daisuke Matsuzaka is a keeper as a zero year card as he never actually played for the Indians. 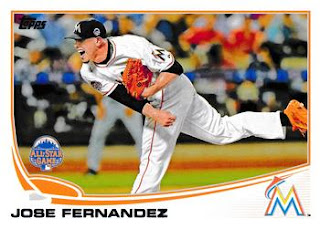 It feels weird to pull a Jose Fernandez card, I was always a fan of his a will add this to the keeper box.

More base, my only Rockies player in CarGo, a Mike Zunino rookie and Joba's mustache. Most of what I pulled is for trade, so if anyone is still building this set, I have traders for you.

Welp, that was a hanger pack of 2013 Update, I promise the rest of these boxes were a little more exciting.
Posted by Rosenort at 19:03