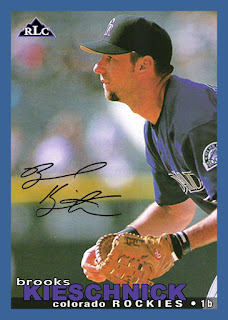 The Card: I have cards older than 1996 Collector's Choice SE, but they are the oldest cards that I actually remember opening packs of. The weird blue border, high quality photography and the gold and silver parallels all bring back memories of the old, long gone, first LCS. While not a set I actively build or am building, still a set I will always be fond of.

The Player: Before there was Shohei Ohtani, there was Brooks Kieschnick. Well, not exactly. Kieschnick was a two way player in college earning him the 10th overall pick by the Cubs in the 1993 draft, gave up pitching for the outfield and didn't really do much, bouncing around originations, mostly playing in the minors for the Cubs, Rays, Reds, Indians and 35 games with the Rockies in 2001 His wikipedia calls these "The Wilderness Years" which is pretty funny. In 2002 he pitched and hit in Triple A, then in 2003 he pitched, pinch hit, DHed and became the first player to homer from each position, along with starting 3 games in the outfield. Injuries in 2004 limited him to just pitching, then was out of baseball a few years later.

The Project: Rockies Legacy Collection custom project to make digital cards of Rockies players who never had one issued.
Posted by Rosenort at 19:07