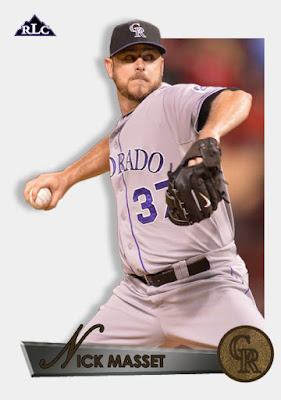 The Player: Nick Masset was a very good relief pitcher from 2006 through 2011, but someone probably only Reds fan will remember. He would miss all of 2012 and 2013 with injuries, finally returning to the majors with the Rockies in 2014. He never reached his pre-injury form, pitching in 51 games with Colorado with a 5.80 ERA, then splitting the 2015 season with the Marlins and Braves. His most famous Rockies moment was probably hitting Evan Gattis and being suspended for 3 games.

The Card: A brand that seems to have got lost in the over-production era, but I always have liked, 1995 Score Summit. I stayed very loyal to the original design, just tweaking the player name font into something a little more to my liking. If you are not familiar with this set, check out the Nth Degree parallels for some mid 90's greatness.

The Project: Rockies Legacy Collection custom project to make digital cards of Rockies players who never had one issued.
Posted by Rosenort at 16:33