Something that I haven't done in a while is buying team sets, before getting involved in trades and finding site like COMC and Sportlots my collection was basically feed by buying a couple team sets a year. While not a huge Bowman fan this years set a couple things that made it worthwhile for me. First was the Ryan Wheeler rookie card. Wheeler played in 6 games for Colorado while Todd Helton was on the DL so I needed this card for the Rockies collection. The big draw of Bowman is the prospects and the Rockies checklist is pretty good, some people knock getting cards of players they have heard of, so I have broken down the prospects included below. 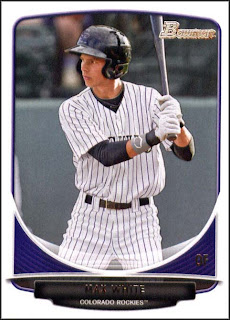 Max White BP14
A 19 year old outfielder, already had cards in 2012 Bowman Draft and 2012 Elite Extra Edition, as well as autograph cards in 2013 this set. The Rockies 2nd round pick in the 2012 draft hit .200 with the Grand Junction Rockies last season (Class Rookie). Projected as a centerfielder with plus speed will likely spent a second season in rookie ball. 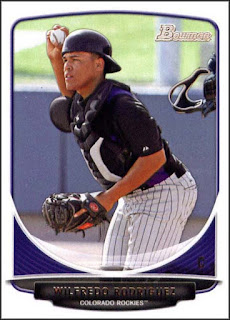 Wilfredo Rodriguez BP58
A 19 year old catcher, this is his first baseball card. It's always nice to get a card of a catcher in his gear, and in Bowman it makes the airbrushing a little less noticeable. Drafted in the 7th round out of Puerto Rico as a defensibly strong catcher, improved his stock with a .319 average and .452 slugging at Grand Junction in his first pro season. In a small sample size, looks to be a solid prospect who will repeat rookie ball in 2013. 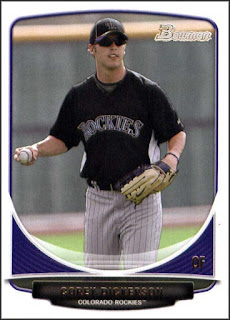 Corey Dickerson BP65
The most advanced prospect of the group, started 2012 in High A with the Modesto Nuts and made the jump to Double A midway through the season. Is hitting .382 in 32 games with Triple A Colorado Springs this season with hits in 30 of 32 games. Not yet on the Rockies 40-man roster, is Rule 5 eligible after this season so he is strong candidate to make his MLB debut at some point this year. Made his cardboard debut in the 2012 Bowman Sterling set. 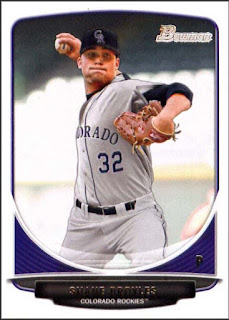 Shane Broyles BP96
A 21 year old pitcher, made his pro debut last year going 5-3 with a 3.69 ERA with the Low A Tri-City Dust Devils. Started 2013 with the A Level Asheville Tourist and has a 1-4 record and a 6.50 ERA over 7 starts. This is Broyle's first licensed card. 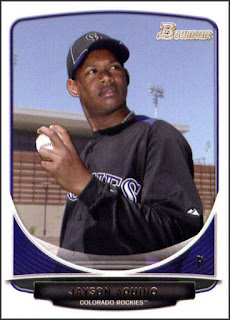 Jayson Aquino BP102
A 19 year old left handed pitcher that Rockies fans may have heard of, starting at age 17 Aquino pitched 3 season for the Rockies Dominican Summer League team going 18-6 with a 1.29 ERA striking out 213 batters over 216 1/3 innings. Made his North American debut in 2012 with Grand Junction going 4-0 with a 1.87 ERA. Reportedly throws in the low 90's with moment and command, already has one of the best change-ups in the Rockies system making him an exciting prospect. This is Aquino's first baseball card and he has autographs in this set as well.
Posted by Rosenort at 11:47