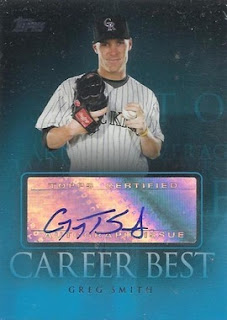 Everyone's favorite European baseball card blogger recent posted his side of our trade and after getting the post today here it's my turn. Upon opening the package I got thinking that American baseball cards coming from the Netherlands to Canada, these cards might have had a more adventurous life than I have. Starting off with an autograph of Greg Smith who was traded with Carlos Gonzalez among others from the Diamondbacks to the A's for Dan Haren, then traded with Cargo and Huston Street to Colorado for Matt Holliday. Smith went 1-2 with the Rockies in 2010 posting a 6.23 ERA, but probably provided more value with the bat, going 4-13 with 2 doubles, 2 RBI and 2 runs scored. Smith recently signed with the Phillies and is pitching in Double-A. The trade came to be based on 2013 Gypsy Queen, in return for a stack of minis, Jeroen sent me 19 base cards, leaving me 13 short of the base set. (Want/Trade list here if you can help me out).

He also sent along a CC Sabathia photo variant from 2012 Gypsy Queen and a big stack of some really nice Rockies cards, way to many to post but here are the top 7. A Wilin Rosario Opening Day Rookie Cup, a metal Andres Galarraga (I am going to peel it), a mini Iannetta and a couple 2012 Gold parallels. Thanks for the great cards! 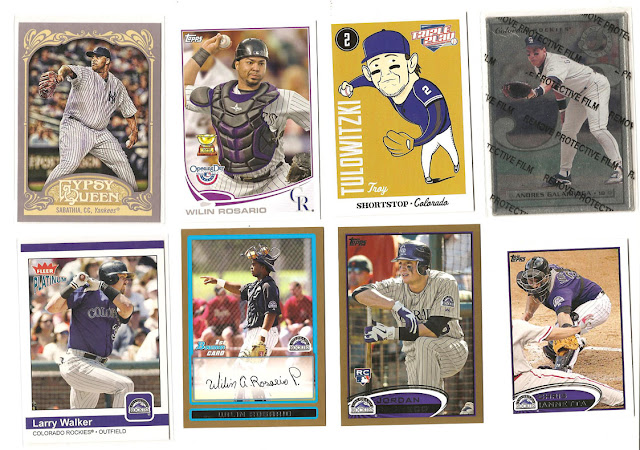