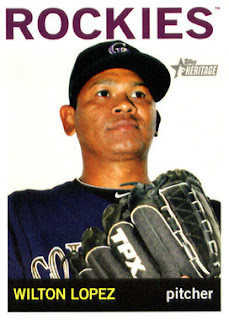 Another Zistle trade, this time with fellow blogger Shoebox Legends. The other side of trade can be found here. The card to the right completes my 2013 Heritage wantlist, actually the card to the right IS my 2013 Heritage wantlist. I will never get excited for a set comprised of posed headshots and close-ups of players in the dugout, and even worse the dead tree that was in all the 2012 Heritage Rockies cards is back for 2013, at least this card is dead tree free. So far this the only Wilton Lopez Rockies card so it's nice to have for the PC.

Also coming along was another Heritage card, this time for the Chris Iannetta collection, Darren Holmes, Darryl Hamilton and a red Jordan Pacheco. Two more 2011 Gypsy Queens to widdle down the list and some catchers with an Expos Ron Hassey and sweet Masked Marauders of Brad Ausmus from 1998 Collector's Choice. I really need to start looking for the rest of this catcher based subset. 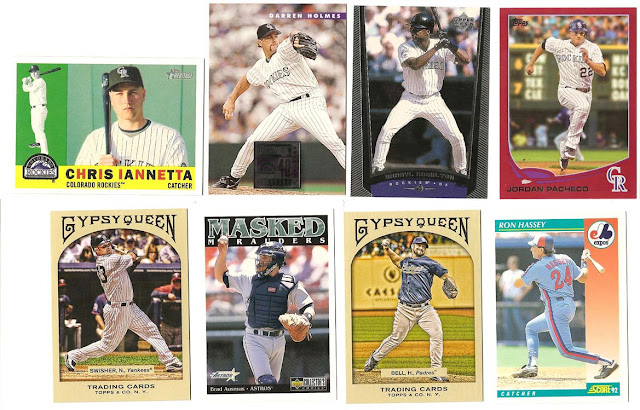 As a nice bonus there was also around 20 1994 Score Rockies, a set that I had very little from. The 3 catcher cards I didn't have go right into the Rockies binder along with the Eric Young featuring a cameo from baseball legend Don Zimmer in a Rox uniform. Thanks for the great trade.