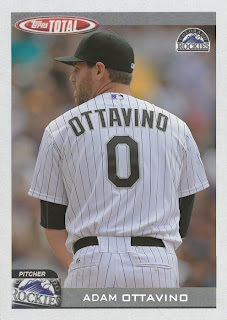 A custom I made a while ago serving two purposes. First to highlight Adam Ottavino wearing number zero on his jersey. As far as I can find he is the first pitcher to wear zero and one of around 15 players in MLB history to wear that number. Second it to mention how much I miss Topps Total. Topps released the Total brand from 2002-2005 as a huge set, 990 cards in 2002 and 2003, 880 in 2004 and 770 in 2005, giving cards to many players that are often ignored in other smaller sets.  Ottavino is a prime example of the type of player Total would have included, someone who hasn't had a card since 2007 Bowman, three years before his MLB debut. Ottavino was a waiver claim by Colorado from the Cardinals and went 5-1 as a piggy-back reliever in the 2012 Rockies 4-man rotation experiment and has become a valuable bullpen piece in 2013. I highly doubt many collectors would complain about Topps losing one of their uber high end sets and bringing back Total.
Posted by Rosenort at 11:45