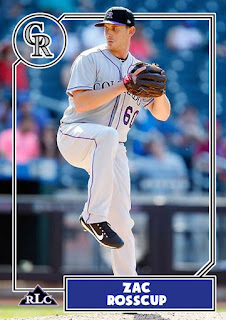 The Player: One of the more recent players to be featured here, Zac Rosscup was acquired by the Cubs from the Rays in a pretty big deal involving Matt Garza and Chris Archer in 2011 and was with the Cubs organization until June of 2017 when the Rockies traded Matt Carasiti for him. Rosscup would pitch in 9 games with Colorado in 2017, then start 2018 on the DL before being selected off waivers by the Dodgers in July of 2018.

The Card: The result of playing around with a template for too long, a border-less 1987 "inspired" card. I like the wood borders too much to even imagine this as an improvement, but something I thought was interesting enough to post, along with a black parallel and "3D"ish style version as well.