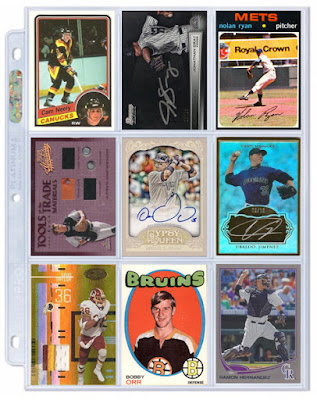 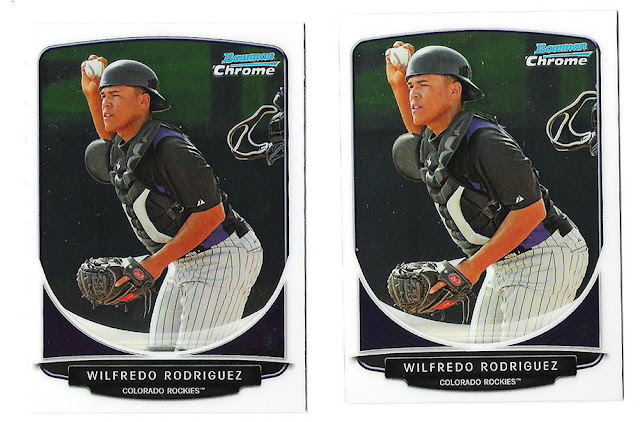 I like to think I keep my want-list pretty organized and current. So when this trade was proposed to me, I was confused because I was sure I already had this Wilfredo Rodriguez card. It turns out the card I had is the one on the left, BCP58. The one in the trade was BCP148, seen on the right. One is the Chrome inserts in 2013 Bowman, the other is from 2013 Bowman Chrome. The only difference being the photo is cropped a little tighter on the BCP148. Someone at Topps was very fond of this photo as it also appears on this autograph from 2013 Bowman Chrome, Scout Breakouts insert from 2013 Bowman Draft and the Diamond in the Rough insert from 2013 Bowman Platinum, so every card he has had with Topps. 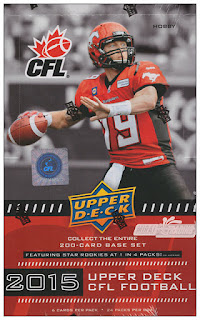 This is the second year of Upper Deck CFL license, and just like last year I picked up a box. (Link the the 2014 box break here). Very similar to last year, the main set is made up of 100 base cards, all offensive players. The next 50 are defensive short prints, last year they were 1 per pack, are now 1:2 packs. The new additions is All-Stars (151-175) at 1:4 packs pushing the rookies back to cards 176-200 at 1:4 packs as well. Relics stay at 2 per box with the patch parallels numbered out of 15. The big jump is in autographs, while 2014 only had 6 autographs in the set, 2015 has 86 in the base autograph variations, and 10 more in the CFL Marks set. OPC retro, Grey Cup moments and Team Logo patches are all back from 2014 as well. The only thing that disappointed me was the the box was $94, while I am sure last year the were $75. $100 after tax is pretty steep for what you are getting here.
Read more »
Posted by Rosenort at 16:59 No comments: 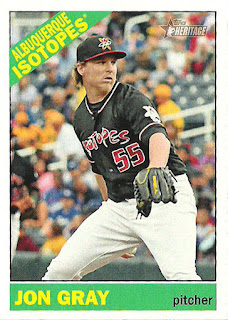 I am seriously behind on posting things here, this PWE came from Doug over at Buckstore Cards and has been on the "to scan" pile for far too long. The bulk of it was 2015 Minors Heritage, with a new Jon Gray card and my first of the Rockies new AAA affiliate Albuquerque Isotopes. The thing I love about this set every year that regular Heritage is lacking is the action shots, I get that the old style sets lacked in game photos, but I still find posed shots in 2015 to be a waste of time.
Read more »
Posted by Rosenort at 18:18 No comments: