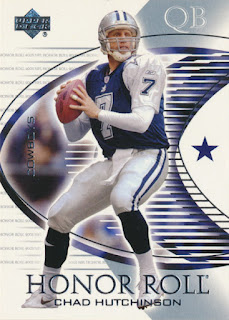 #014 - 2003 UD Honor Roll - Chad Hutchinson
Two sport athletes are a must to include somewhere, Hutchinson played in 15 NFL games between the Cowboys & Bears as well as 3 games with the Cardinals of the MLB.
Read more »
Posted by Rosenort at 19:15 2 comments:

Wes Parsons was claimed off waivers by the Rockies in August of 2019 and finished the season with Colorado, his last in the majors. His 15 games run with the team was mostly forgetable with no desictions and a 6.98 ERA that was ballooned by two really bad outings. He spent all of 2020 with the Rockies "Alternate Training Site" (remember no minors in 2020), and has spent 2021-2022 with the NC Dinos of the Korean League.
I have always liked Metal Universe going back to the Giant Claws of 1997, but never got far with a custom. This time it actually started to look like something and eventually became something I am pretty happy with. This is heavy based on the 2021 Hockey design with a few tweaks, mostly in the player name area, and adding a very Rockies purple background.
Link to Project

Posted by Rosenort at 20:21 No comments: 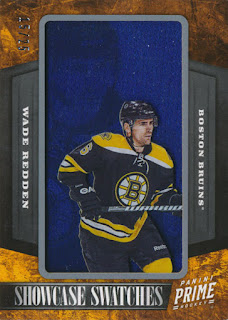 Mike McCoy made his MLB debut with the Rockies in September of 2009, played in 12 games, not starting any and went 0-5 at the plate. He did manage to score a run and steal 2 bases as a pinch runner.

McCoy would spend the next 3 years with the Blue Jays, playing every position other than First & Catcher, including pitching one inning. His versatility allowed him to stay in the majors for 170 games despite hitting for a .190 average.

When was the last time you though about Upper Deck Victory as a set? Back when it seemed like there as 50 sets a year, Victory was usually good for some weird players (see 2002 Mario Encarnacion). Not a horrible design, just something different to play with.

Posted by Rosenort at 16:07 No comments:

Plagued by arm trouble and inconsistency, Blaine Neal managed to appear in 113 career MLB games from 2001-2005, with the 2002 season being his career highlight going 3-0 with a 2.73 ERA over 32 games with the Marlins. His final 11 games would come with the Rockies, finishing with a 1-2 record and a 6.14 ERA for Colorado. He would pitch professionally until the 2010, as well as with Team USA in the 2008 Olympics, but wouldn't return to the majors.
I thought I had posted a 1973 Custom before, but what better time than with Heritage coming out recently. I stayed pretty loyal, but used a different position icon, as I like this one better.
Link to Project
Posted by Rosenort at 19:45 No comments:

Did you know 12 different players patrolled left field for the Rockies in 2001. If you did, you probably knew one of them was Jacob Cruz. Cruz was traded to the Rockies in June of 2001 for Josh Bard & Jody Gerut, both of which would have solid MLB careers. He would go on the play 44 games for Colorado, hitting a pretty bad .211 and eventually loosing playing time when the Rockies traded for Alex Ochoa in July, then would be released in November.

1992 Pinnacle is one of my favorite all-time designs, the RLC logo looked weird where the Pinnacle logo was, so I moved it down, but now it looks weird with that spot empty, but I am newly commited to posting these things, so here it is.

Posted by Rosenort at 19:10 No comments: