Now that 2021 is in the books for the old Football Team and the new name is on the way, I present Part Two of the Not-So Brief History of Modern Washington Kickers. Part One is here. 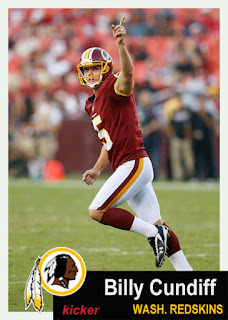 Billy Cundiff was signed to start the 2012 season, but only lasted 5 games going 7-12 including a 1-4 game in a 24-22 win over Tampa Bay. His Redskins stop was only a small part of his 136 game NFL career which included a Pro Bowl and 1st Team All Pro in 2010, 3  NFC Special Teams player of the Week awards, and a record tying 7 field goal night on Monday Night Football. 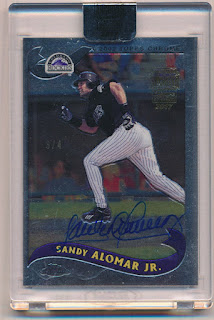 I am ridiculously far behind on posting stuff, but I refuse to let this little thing I do die, so here is the rest of the COMC package I received like 2 weeks ago. One of my top 5 pick-ups of 2021, Sandy Alomar, Jr. has been in a ton of these Topps Archives Buyback releases, but I finally spotted one that featured one of his few Rockies cards. I paid $20 for this serial number 3/4 and was very happy to do so.

Check out my Commanders??? 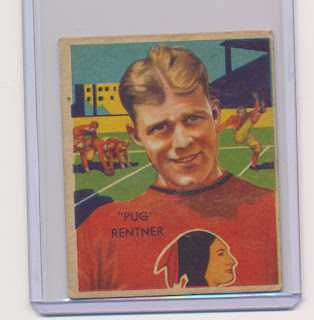 The first COMC package of the year with some members of the franchise possibly to be know as the Commanders? Starting with a Boston Redskin, and the newest, oldest card in my collection, Pug Rentner from 1935 National Chicle. Pretty good score for $22 bucks, and a check of the "One of Every Redskin/WFT/???" project.
Read more »
Posted by Rosenort at 18:28 2 comments: 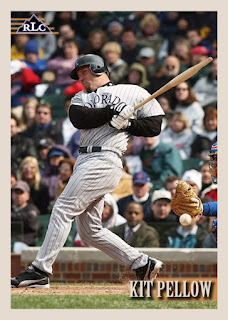 The Rockies career of Kit Pellow was short, 70 games over two seasons, but he will forever be the answer to a couple trivia questions. Who was the Rockies opening day left fielder in 2004 (he went 0-4 with 2 strikeouts and was replaced in a double switch), and who broke up Tom Glavine's no-hitter with 2 outs in the 8th in May 2004. Kit did show some versatility at the bottom of the roster, playing 5 different positions, including catching, but his .240 average and a couple homers was not enough to keep him in the league as his 2004 season in Colorado was his last.

The card: A subtle tweak to 1993 Bowman, and the upcoming 2021 Bowman Heritage, not full bleed, but lots of room for the photo. The logo didn't really fit so we ended up with a very Donruss-y look instead.