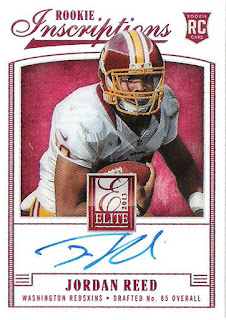 Wow, no one was more surprised by the Redskins winning the division than Redskins fans. Yeah, it was a terrible division, but it still counts. The incredibly young O-Line played well, Jordan Reed stayed healthy and Kirk Cousins stopped throwing interceptions for now. The above Jordan Reed is from 2013 Elite, a really nice acetate card that is pretty much all clear other than the photo, a card I have had for a while but never scanned until now. With one game left Reed has 83 catches for 907 yards and 11 touchdowns, one of the best years ever for a Redskins Tight End.
Read more »
Posted by Rosenort at 15:38 No comments: 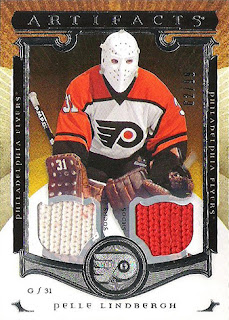 Not all Friday Black pick-ups, but all part of a COMC shipment that contained my Black Friday cards. Starting off with the most exciting card in the package. A dual sock relic of Pelle Lindbergh. This is not near as gross as it sounds as these are from the hockey socks (which are more of leggings really), and not actually worn on the feet. Lindbergh is a pretty tragic story, an All-Star and Vezina Trophy winner who died in a car accident at the age of 26. It does make you wonder where Upper Deck got hockey socks from a guy who last played in 1985. The only bad part about this card is that the sock portion really bulges out of the card, there is no real creasing, but it creates a really weird 3D kind of effect.
Read more »
Posted by Rosenort at 15:46 1 comment: 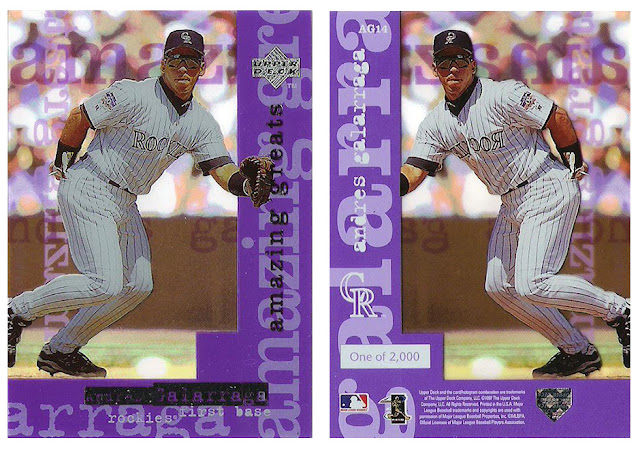 These seemed pretty hard to find for cards limited to 2,000 copies, but were worth the search. Nice looking cards, a little busy but not over the top. Fairly large set for inserts at 30 cards they also come in a die-cut version limited to 25.

All I can think of when I see this is the Orioles "This is Birdland" gif.
Posted by Rosenort at 18:31 2 comments:

Cleaning out the Scan folder again 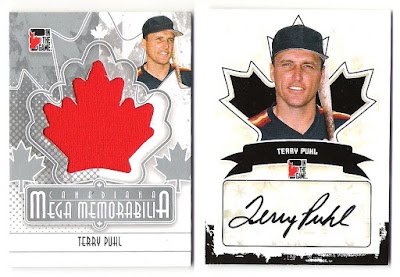 I intended to clean up my office, but that quickly took a back seat to catching up on scanning and cleaning out the scan folder and to be scanned pile. These are all from a previous COMC order, and with a new one on the way it was way past time to post some of these and scan them in. Starting with some 2011 In The Game Canadiana of Terry Puhl, one of the very few Saskatchewan born MLB players. Nice to have an auto of his and a sweet red patch from the old Astros uni even if they are unlicensed.
Read more »
Posted by Rosenort at 17:16 No comments: