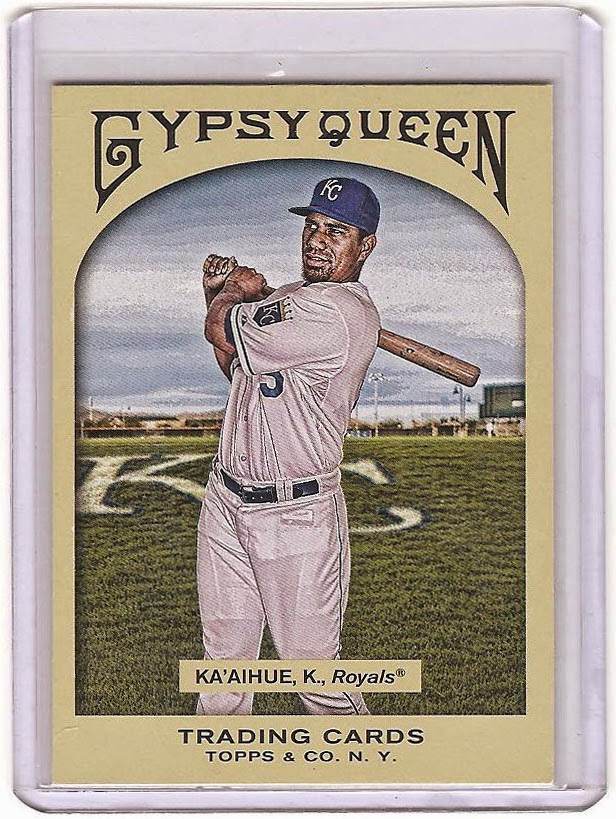 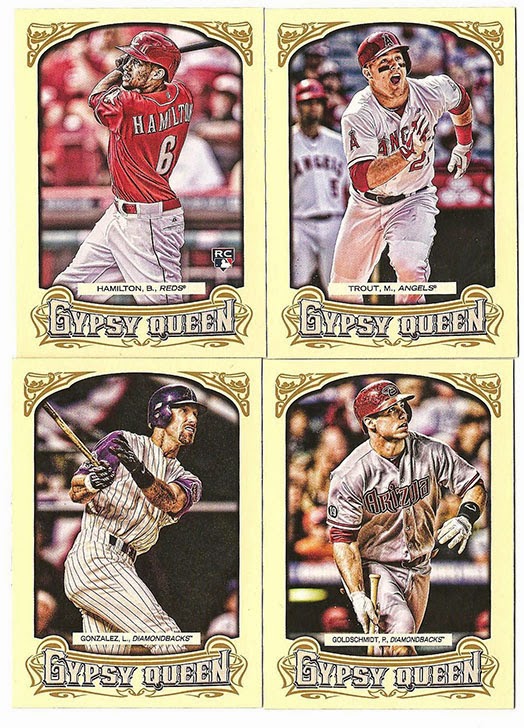 A pretty large Zistle trade with around 30 cards coming my way. This is the third trade over at Zistle with Laurie V from LV's TTM blog. No surprise the trade centered around some 2014 Gypsy Queen short prints. These four put me needing 27 more, it always nice to check Mike Trout off the list along with a rookie of Billy Hamilton.
Read more »
Posted by Rosenort at 11:44 No comments: 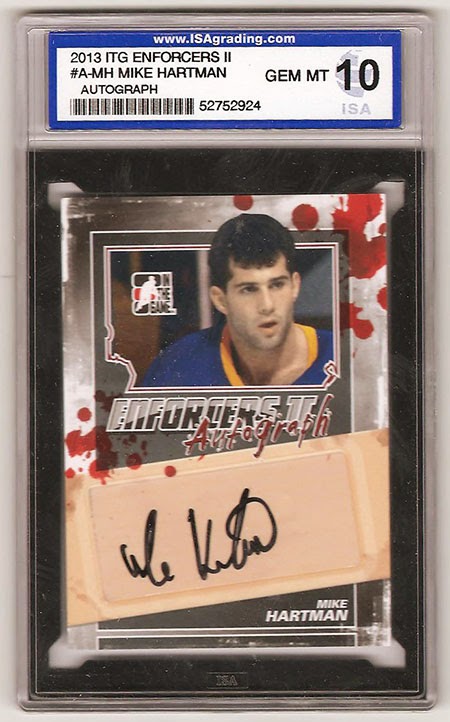 The only thing better that getting cards in the mail, is getting free cards in the mail. This came from a recent twitter contest from the fine folks at zistle.com. A really nice design for an unlicensed company and probably the best way to hide a sticker auto I have seen. I really don't remember Mike Hartman, despite him playing 225 games from 1986-1995 which was the time I followed hockey. As the scan shows, the card is graded a perfect 10 by ISA Grading, not a company I have heard from before, but a really nice slab with a black insert bordering the card with notches for the corners. So a big thanks to Zistle and ISA Grading for the contest and the card!
Posted by Rosenort at 12:33 No comments:

Joy of a Completed Set* (kind of) Bowman Black Collection 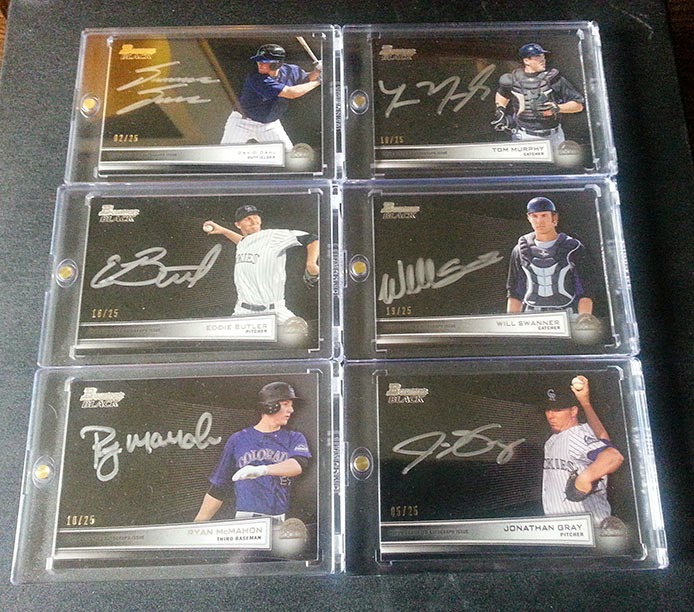 I have shown all these card individually but I just wanted to show them off all together. All the Rockies cards from the Bowman Black Collection Autographs spanning several Bowman releases from 2012 and 2013 (not counting the Tyler Anderson redemption which I don't think was ever made). Pictures and scans do no do these justice, they look amazing in a nice, new clean one touch.
Posted by Rosenort at 12:25 No comments: 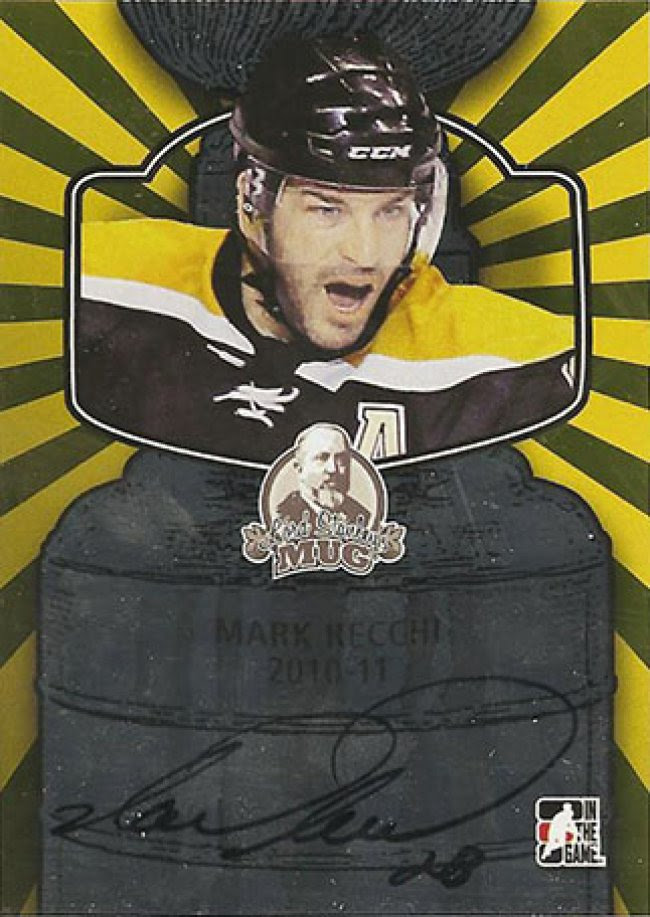 Recchi came to Boston at the end of the 2008-2009 season and stayed for two more seasons, winning the Cup in his final season, playing in 25 playoffs games with 5 goals and 14 points.
Posted by Rosenort at 11:26 No comments: 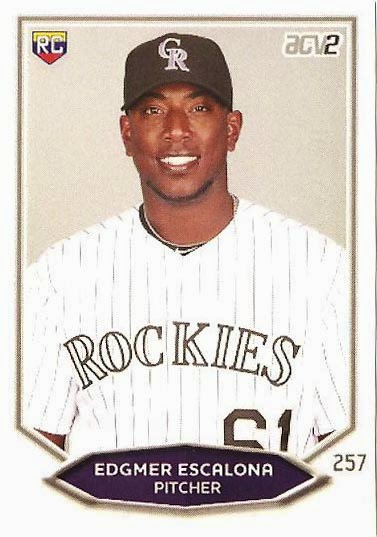 Sometimes searching for weird Rockies stuff on the bay head into interesting directions. Other than a few auctions and a partial checklist on Zistle, I can find zero info on this sticker set. Listed as "2013 ACV2 Venezuelan Stickers", these are single sided stickers, roughly 1 7/8" x 2 11/16" in size,  featuring Venezuelan major leaguers. Being a completest and sucker for oddball stuff, I ordered a couple, namely Edgmer Escalona and Felipe Paulino, two players not featured as Rockies on any North American card release. Nothing special, but something unique enough to fit into my Rockies collection.
Posted by Rosenort at 11:50 No comments:

Email ThisBlogThis!Share to TwitterShare to FacebookShare to Pinterest
Labels: One of Every Rockie

Another trade with somewhat regular trading partner and fellow Canuck, Sportscards From The Dollar Store

First off, he completed my 2013-14 Upper Deck Series 1 set, including my first Torey Krug card,

then checked off all but one of my 2014 Flagship needs, just Jean Segura left to go,

finally finishing my 2014 Gypsy Queen base set, just the short prints left to go. Thanks for the great trade!
Posted by Rosenort at 12:27 No comments: 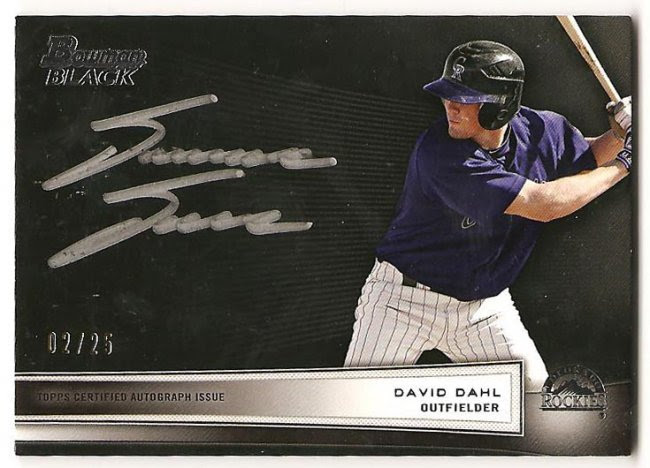 My first Bowman Black Collection from 2012. The 2012 versions are not as glossy as the 2013, making the player photo stand out a little more. David Dahl was drafted 10th over by the Rockies in 2012, and had a great season at Rookie level Grand Junction in 2012, but missed all but 10 games of 2013 with injury. Listed in most places as the Rockies top non-pitching prospect, Dahl is starting 2014 in Single-A with the the Asheville Tourists.
Posted by Rosenort at 11:36 No comments:

Play at the Plate Contest 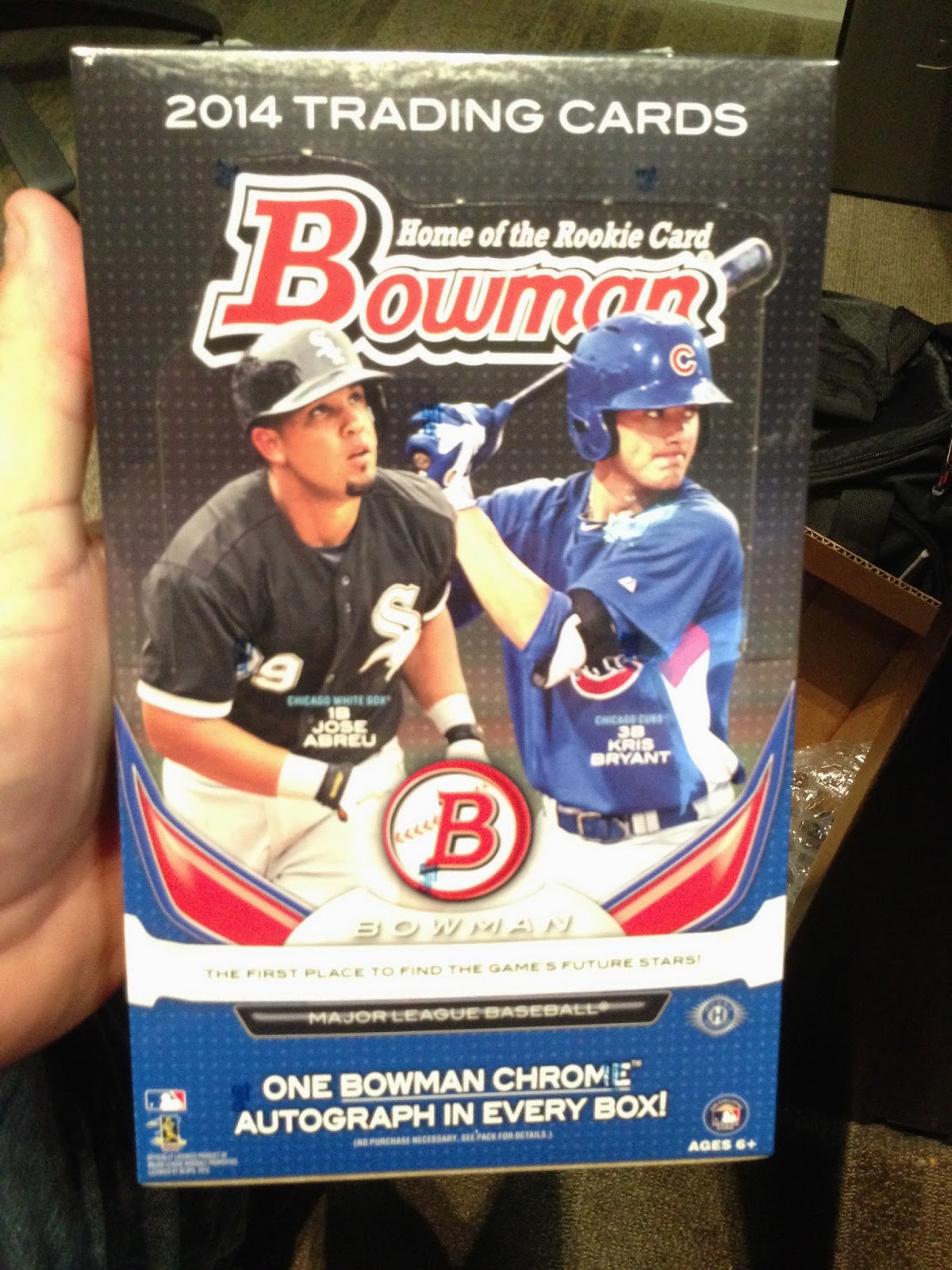 A box of 2014 Bowman, generously donated by Topps, is the prize over at Play at the Plate, check it out.
Posted by Rosenort at 10:28 No comments:

Email ThisBlogThis!Share to TwitterShare to FacebookShare to Pinterest
Labels: Pimpage

Trade From The Skybox 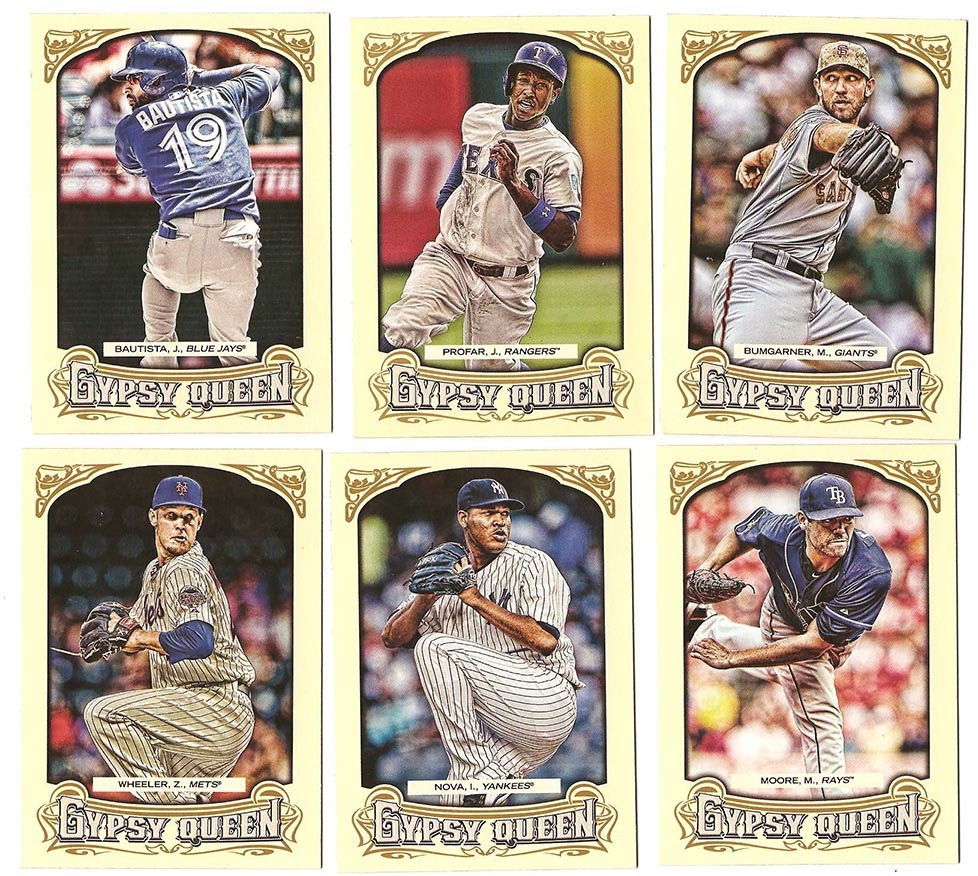 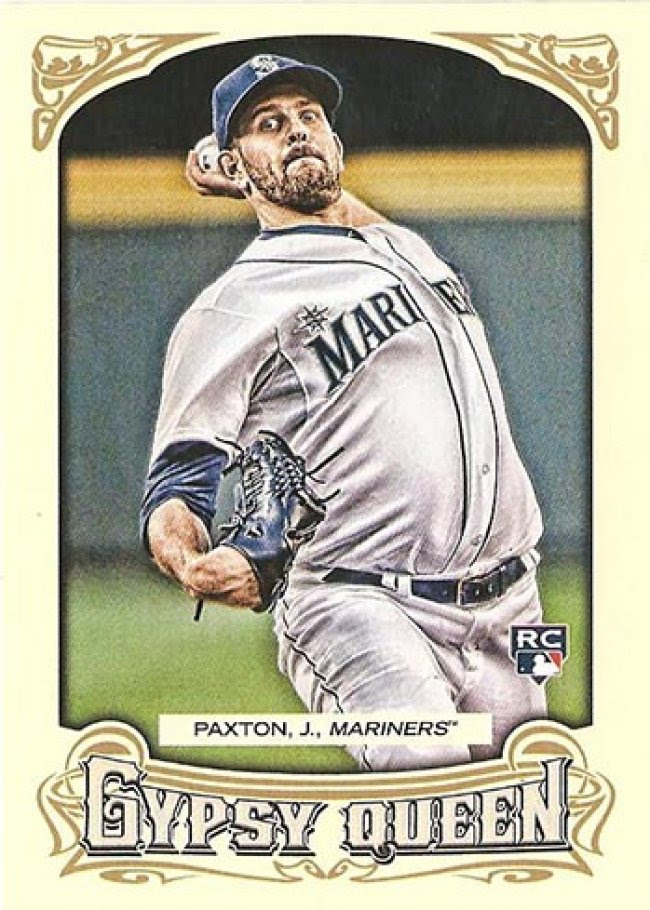 A rare PWE finds it way North of the border. It contained two 2014 Gypsy Queen short prints, one being the Canadian pitcher for the Mariners, James Paxton. The other being Torii Hunter, which for some reason was not in my scanned cards to be posted folder. So a quick thank you to Mr. Smith over at ARPSmith's Sportscard Obsession for helping me out.
Posted by Rosenort at 11:46 No comments:

Topps High Tek, or how to take some interesting, and ruin it.

After the success of the clear parallels in 2014 Topps flagship, Topps announced they were bringing back the Tek line. As a fan of acetate cards, I was obviously pretty excited about this, but a little worried about what the product would be like. I was right to be worried.

In the three years that Tek existed, every year it was released as 20 packs of 4 cards, or 80 cards per box. This would give a nice selection of the multitude of patterns and a fair amount of trade bait for player and team collectors.

2014 Topps High Tek will give you 8 cards per box. That's right, it's another high end set. One autograph, one serial numbered card, and 6 base cards. What a thrill it must be to open a box and get 6 cards towards the set.

It was bad enough making Stadium Club, a set that used to be about photography, a mid-high-end set to get lost in the shuffle with Tribute, 5-Star, Tier 1, Triple Threads and whatever other carbon copy of each other sets, but this takes the fun behind Tek and crushes it under a heel like a disposed cigarette butt.

I love acetate cards, but I still don't have a 2014 Topps Clear, I was pumped when they announced my favorite set, Gypsy Queen, would have clear minis, they are 1/1 and I will never own one. Thanks Topps, for making another set I could not care less about.

The link provided here gives a good breakdown of the product.
Posted by Rosenort at 12:08 2 comments: