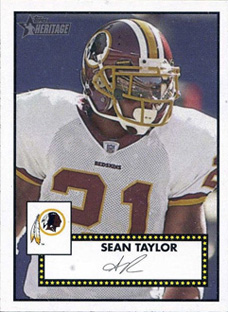 Sunday will mark four years since Sean Taylor's death. Taylor was my favorite player, someone who gave hope to an organization that has had little hope since Dan Snyder took over. He had everything, size speed and natural instincts for the ball, and there is no reason not to think had he stayed healthy, that Taylor would have been a Hall of Fame player, and one the greatest to play the safety position. I remember following him from the Hall of Fame game in 2004 in which he intercepted two passes, returning one for a touchdown in his pro debut. As a Redskins fan it was exciting to his progression from a rookie having to earn his playing time under Joe Gibbs to a potential star earning his first Pro-Bowl invite in 2006. The 2007 season is when this really started to come together for Taylor and he was playing at an Defensive MVP level. Then tragedy struck and he was shot in his home during a home invasion and died in hospital the next day. I think one of the reasons we love sports is that it is an escape from real life, but this is one of those times when real life reminds you its always there. I still remember the 10 man defense to open the Buffalo game, leaving Taylor's safety spot empty to begin the game. Unfortunately the Redskins are on the road Sunday, but I hope whoever is covering the game with make some mention to remember #21.
Posted by Rosenort at 13:13 1 comment: 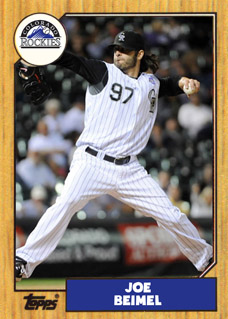 There is something I love about the 1987 Topps design, one of the first sets I collected, although in Canada we got the O-Pee-Chee version, I still love those tacky wood borders. The hardest thing about making customs of this year is the weird font Topps used for the player name, and the fact that no real Colorado Rockies cards exist before 1993, I think I got fairly close here after a some trial and error. This Joe Beimel fills a hole in my 2009 Rockies playoff roster team set, as I could not stand looking at the placeholder of him with the Dodgers. I printed it off on photo paper and it looks good in a binder, but the final product was a little flimsy. Back of card after the jump.

Continuing with the 1971 Topps variation series, card #42 featuring Boots Day. Two versions exist, one with a light tower behind his right ear, and a later version with the tower airbrushed out, but still slightly visible. The graded cards I have seen mention "No Stadium Light" on the variation with no mention on the version with the light. The "No Light" version is the harder to find version and seems to have a price premium over the card with the light. All the OPC versions I have seen have the light tower, but the sample size is fairly small on this.

Another entry in the 1971 variation collection, card number 371 Jack Hiatt. Two versions of this card exist, one with a white dot after "catcher", and one without. The white dot version seems to be much more common, but there seems to be no price premium and both are treated as a common card, with no designation on the graded versions I have seen. Pretty standard card for the early 70's era, with the classic windbreaker-under-jersey look. The photo appears to be from his Giants days with his logo poorly airbrushed out, or blobbed over, even though he split 1970 between the Expos and Cubs. The picture on the back does have Jack in his Astros hat though.

After finishing my 1971 Topps set, I set out to track down the variations that existed. Here is the first in a series of 1971 Topps variations. One of the easier ones to spot is the Carl Morton card. One version has a black line angling up and to the right from the logo on his cap, and the other has no line. Both versions seem to be fairly common, and it this time both can be found for purchase on several online sites for the price of a common card. There is no mention of this variation on the few copies of this card I have seen graded, probably because both versions seem to be very common. The copies that I have seen of the O-Pee-Chee version of the card all have the black line, but that is a very small sample size at this point. 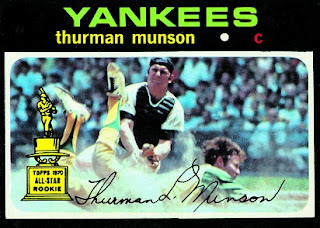 Here it is in all it glory. The 1971 Topps #5 Thurman Munson. Not his rookie card, but his first solo card and what a beauty. This is probably my favorite card of all time, 1971 is my favorite set of all time, frustrating to collect (inspiring the name of this blog) but also rewarding when you find a well centered, sharp cornered diamond in the rough. Open up binder with a 1971 set and first page, right in the center is this card, impossible not to notice. Also as a huge fan of action shots featuring catchers all geared up, this card is brilliant. And who doesn't love the Topps All-Star rookie cup trophy in the corner. The weird thing about loving this card is that I usually hate horizontal cards, but with the awesome photography this one works. The card was reprinted in 2010 as part of the "Cards Your Mom Threw Out" insert set, giving collectors a cheaper option to add this classic card to their collection. Random fact: The Oakland A's player sliding head first has been found to be Chuck Dobson, a pitcher. Just think, if the AL had the DH in 1970, this work of cardboard art would have never happened. Another reason to dislike the DH in baseball.
Posted by Rosenort at 07:40 No comments:

Another Baseball Card blog to get lost among the masses, if someone reads this, fine, if not, at the worst it will help me to keep some stuff organized, so here it goes.
Posted by Rosenort at 07:17 No comments: