Continuing with the 1971 Topps variation series, card #42 featuring Boots Day. Two versions exist, one with a light tower behind his right ear, and a later version with the tower airbrushed out, but still slightly visible. The graded cards I have seen mention "No Stadium Light" on the variation with no mention on the version with the light. The "No Light" version is the harder to find version and seems to have a price premium over the card with the light. All the OPC versions I have seen have the light tower, but the sample size is fairly small on this. 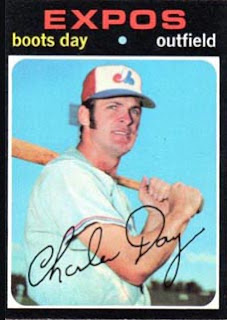 In 1971 Boots was playing in his first full season with the Expos, after joining the team early in the 1970 season. Described as a scrappy outfielder with speed and occasional power, only played 3 full season in the majors from 1971-1973. Finished his career in 1974 with 8 home runs, 98 RBI and a .256 average. Random fact: Nicknamed "Boots" by his sister when he was a baby.