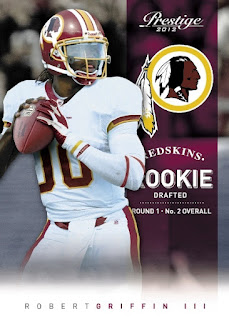 Well, we got him, Shanahan has his "franchise" quarterback to groom in an attempt to save his reputation and Danny Snyder has his big off season splash that will sell more jerseys. Topps and Panini took the opportunity to pimp their products showing off the NFL's newest stars in the making. I still love the Prestige design, and like the Topps design, I just wish the Burgundy and Gold on the bottom was switched with the gold on the bottom. I am actually surprised how little I find myself caring about this, this seems a lot like a team jumping on the Cam Newton bandwagon after one season and trying to find one of their own. I do hope Griffin leads the 'Skins back to glory, but we have been through this before. After going through Heath Shuler, Desmond Howard, Patrick Ramsey, Jason Campbell, Jeff George, Brandon Lloyd, Adam Archuleta, Albert Haynesworth and the countless other personnel mistakes I have a reason to be a little jaded. 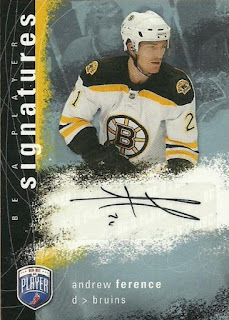 So the Bruins are done which means it's time to focus on Baseball completely, and once my two boxes of Gypsy Queen show up I will be done with hockey posts for a while. It was a really well played series by the Caps, but a first round loss is always disappointing. Continuing with auto of last years Bruins team we have Andrew Ference, Ference really stepped it up in the first round with the losses of Adam McQuaid and Joe Corvo, and will always have a place in Bruins fans hearts for scoring a goal and flipping off the Montreal crowd, not the classiest thing in the world, but it fits in the Bruins vs. Habs rivalry. 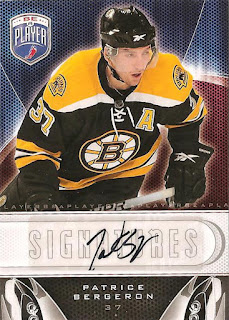 To get ready for a big Game 7 against the Caps tomorrow night we have a small addition to the Bruins 2011 Stanley Cup Champs auto collection and a few newer Neely's I needed. A couple of 2009-10 Be A Player Signatures in Patrice Bergeron and Shawn Thornton. The great thing about the Be A Player sets is affordable autos and autographs of guys like Shawn Thornton. That's two more down for the '11 Champs project. I ended up with 2 of the Bergeron so one is for trade if anyone is interested. Rounding it out is 2008-09 Upper Deck Legends Masterpieces, 2010-11 SP Authentic and a 2010-11 OPC base of Cam Neely. 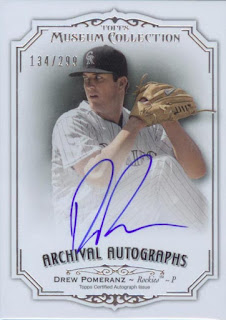 Another one card mail-day as I wait for my 2 boxes of 2012 Gypsy Queen to show up in the post. After checking out the Museum Collection checklist the only card I really wanted was the Pomeranz auto, I found one that shipped from Taiwan, I get nervous ordering from that far away, but the card came in 10 days and was packaged well. Nice high end card, really thick card stock, sharp auto. The thing I noticed with this is that Topps used the same picture for 3 out of the 5 Pomeranz cards they have produced. 4 out of 6 if you count Opening Day as its own release. Heritage got a different photo and there is a photo variation of the museum auto. They altered the GQ card to a road uni, but if you look at the crowd in the background, it's the same shot. Oddly enough it is also the same photo Cards from the Quarry used for a custom back in November. 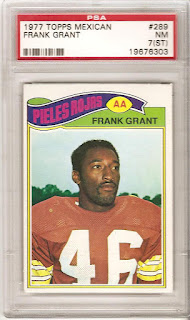 A one card mailday bring me closer to completing probably my longest running project, the 1977 Topps Mexican Redskins team set. This is a crazy set to collect cards from and this Frank Grant gives me 17 of the 24 Redskins cards. One of the ones I need is the Eddie Brown, which is part of the "Dirty Dozen" and runs around $250. The 1977 Mexican set features the same 528 cards with the same pictures as the standard American set, but all the text is in Spanish and for the Redskins the team name is in red instead of white. The cards were issued in two card packs with gum, so many of the cards have gum stains and the sheets were cut utilizing a perforated system that left remnants of the perforations on the card edges.

There is a great website at www.toppsmexican.com that is loaded with information. 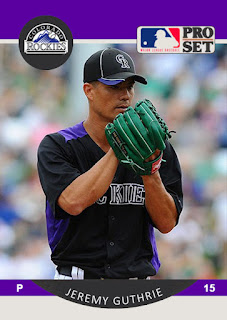 A hockey set from my youth that might possibly be the most over-produced set of the over production era. Pro-Set never did get a baseball license, so most of us were saved from the flood of worthless cardboard, but hockey and football fans my age probably have boxes and boxes of Pro-Set. This was the set that everyone in school collected when the early 90's boom hit our town, this isn't a bad checklist with rookies of Jeremy Roenick, Alexander Mogilny and Jaromir Jagr.

Guthrie is the Rockies new 'Ace', and gets the start tonight. The photo is from a St. Patrick's Spring Training game, hence the green glove.

Posted by Rosenort at 14:40 No comments: 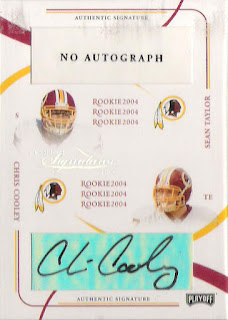 I was talking to a friend who is getting his son into collecting and he asked me what my best card was. This got me thinking as I really pay no attention to card values other than what I am will to pay for the cards I want. As a team collector I am usually after team sets and commons more than high value cards, so I don't really have any huge value cards. This led me to go through some boxes trying to decide what my "best" cards were. Here is what I came up with for my best football card, after passing through my small  1977 Topps Mexican collection, I stumbled on 2004 Playoff Prime Signatures Sean Taylor /Chris Cooley . This card could have been a lot better, but Sean Taylor never signed any cards for card companies, but as a Cooley fan having his signature is nice. It's serial numbered out of 199 and is a nice thick card with the auto inside the card similar to a relic. I also found 2 Sean Taylor relics, one I forgot I even had and a super super Certified Materials numbered 21/25. So a simple question led to a nice browse through my collection, if anyone else reads this and wants to share, "What's your best cards?" 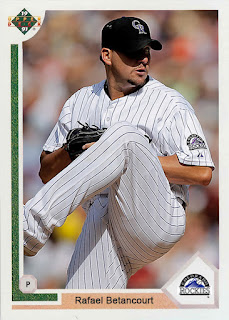 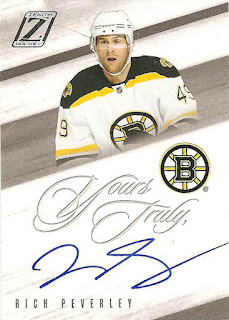 A strange start to my 2011 Boston Bruins Stanley Cup Champ autograph collection. I bought this Rich Peverley card off eBay in early February and I finally arrived last week, after opening a dispute and hoping I didn't get ripped of it looks like the guy forgot to send it or something. I like the Bruins chances of beating the Caps and really should sweep them, but repeating as champs is a big time long shot.

This is mostly just a quick post as I have been ignoring the blog in favor of actual baseball and the long weekend, and have booked the afternoon off work to watch the Rockies home opener. Baseball is back and the B's are in the playoffs, good sports time for this guy.

Posted by Rosenort at 10:25 No comments: 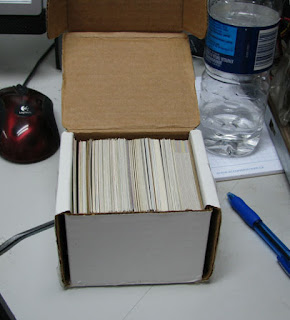 Today began well with a completed trade with Royals & Randoms, after sending him some Royals along with some Kickers/Punters and a few Randoms, he sent back this box full of goodness. A pile of Rockies, Redskins and few randoms of my wantlists. I scanned a little bit of each to give a taste of the total package. I have to thank Josh for looking through my lists as there were almost no cards in the box I already had. Along with the Rockies were some 1992 Pinnacle which I am very passively trying to complete, some 87 Topps wants and the sweet 1978 Darrell Porter. The large pile of Redskins included a Brad Edwards I needed and a Jumpy Geathers which fills a need for the most wanted list. Thanks for the great trade. 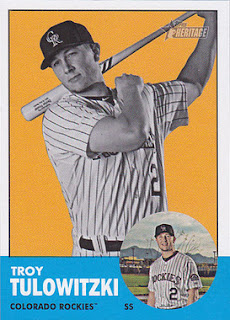 I recently joined in my first group break, 4 boxes of 2012 Heritage with 2 packs of 2012 Topps Tribute thrown in as a bonus. I picked the Rockies without realizing that there were no Rockies in the Chrome parallels. The highlight is the Tulo image swap, but other than that I got my ass kicked, ending up with one floating head Chrome (HP100), a Tulowitzki regular short print and a Carlos Gonzalez SP along with the base set and 3 floating head cards. The Rockies were shut out on the Tribute packs. Fairly disappointing results considering the Rockies are heavily featured in the short prints, maybe its karma for making fun of Heritage when it came out.
Posted by Rosenort at 14:11 No comments:

I have been planning on doing this post for a while, but finally just got around to it, a few months ago the kind individual behind Cards from the Quarry let me see his "One of every Rockies" master list to compare with mine, while we had the players the same, our definition of what constitutes a Rockies card differed slightly. Among the differences were Jeff Fassero and Bruce Hurst, both have one card in a Rockies uniform, but are listed as D-Backs and Rangers. The reverse happened with Jose Mesa, who has cards listing him with the Rockies, but only shown in a Pirates uniform. Multi-player cards also came into question, Mark Strittmatter appears on two multi-player cards, not one of his own, but both feature only Rockies players, Thomas Field has his first card in the new heritage, but it has a Giant and a Cardinal on it. So a question to team collectors, what are your opinions on what constitutes a team card, I am curious to see how other people define team cards (and if anyone actually reads this)