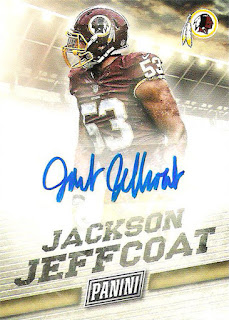 Yup, I bought a sticker autograph of Jackson Jeffcoat. Why you ask, because this is the only Jackson Jeffcoat card to picture him in a Redskins uniform, and he probably would not have even got this card if it wasn't an obvious sticker dump by Panani using up stickers leftover from his rookie cards with the Seahawks last year. This is from a promotional set call NFL Player of the Day, I don't much about it other than it has a Redskins back-up linebacker and special teamer on the checklist. The craziest thing is I had to actually outbid someone for this.

The back of the card lists his career highlights as being the son of Jim Jeffcoat and running a 4.63 40 yard dash, which is good for a 245 pound linebacker according to someone at Panani. Jeffcoat did record a sack and an inception in 3 games with Washington last year, but hasn't seen much time this season. 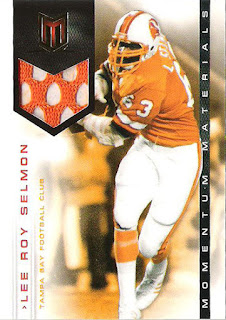 Seeing as it was from a Canadian seller who offered combined shipping, I threw out some other low bids just to see what happened, I ended up with the above Lee Roy Selmon, a member of both the College and Pro Football Hall of Fames and a nice vintage creamsicle color patch linited to 199 copies, for less than a loonie, I will take it. 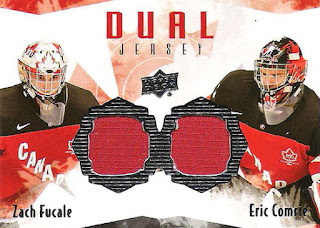 The other el-cheapo-no-one-else-wanted-it-card is a dual relic of Zach Fucale and Eric Comrie, the goalies for Canada's Gold Medal in the 2015 World Junior Tournament. I am pretty "meh" about this one as I don't follow Hockey Canada as much as the average Canadian and a quick googling informed me Fucale has a the dirty stink of the Habs on him, so this one is available for trade.
Posted by Rosenort at 16:44