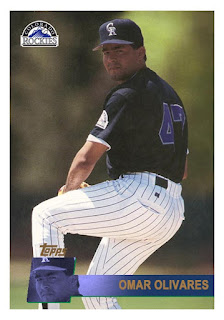 You might wonder why I am doing a custom of a guy that played in 11 games for the Rockies 18 years ago. It kind of ties in with a couple projects, one being having a photo of every player to play a game for the Rockies and another being collecting old Rockies Magazines/programs sold at Coors Field. These magazines have player photos in the back and the most recent one to come my way had a color photo of Omar Olivares with the Rockies, something I had not found anywhere before.

Olivares was signed as a free agent by the Rockies in April of 1995 after spending 5 seasons with the Cardinals. After winning his Rockies debut, pitching 5 scoreless innings against Houston, Olivares struggled finding himself in bull-pen after 6 starts and was selected off waivers by the Phillies in July ending his time with the Rockies.
Posted by Rosenort at 10:36