One of the weirder variations I have seen, the eyes up/down variation. I am assuming the earlier versions have Ron looking up and to his left, then the later versions have his eyes airbrushed to be looking at the camera, but I don;t actually know which came first. It's actually a fairly well done airbrush job, nothing as brilliantly terrible as Dick Williams magic hat, but a little creepy when looking at both versions. Both versions are readily available with neither carries a premium over the other.

This is Ron Cook's rookie card, with his only other card being in the 1972 set. His first season the the majors (1970) had mild success, going 4-4 with a 3.72 ERA over 41 games, including 7 games started. However his second and final season would not be as successful, going 0-4 with a 4.91 ERA over five games, this time starting four. 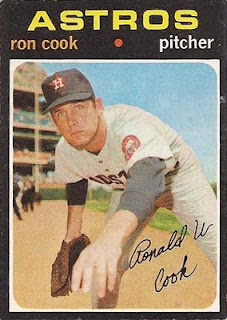