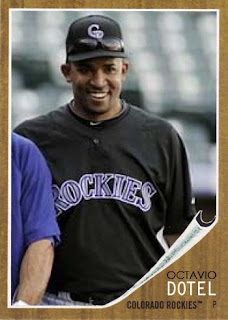 Looking to make one last post before leaving for the Holidays, and inspired by Night Owl's Dotel post, here is a quick custom of Octavio with the Rockies. Once Dotel suits up for the Tigers in 2012 he will hold the record for most different teams in one career. Dotel only pitched in 5 1/3 innings over 8 games with the Rockies, was not featured on a card with the team, and this is the only photo I have ever seen of him in a Rox uniform. Dotel has had a very interesting career, he became the first National Leaguer to start at least 15 games and save at least 15 games in one season in 2000. He shared a no-hitter with 5 other pitchers in 2003. He was traded to the Rockies from the Dodgers while the Rockies were in L.A. playing a series against the Dodgers. From starter to closer to reliever to basically a ROOGY to World Series Champion, and at 38 he still has chance to add to that.
Posted by Rosenort at 13:17