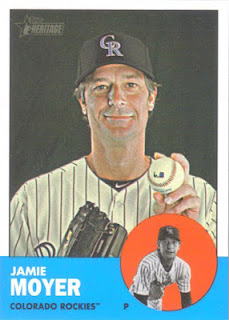 You see that card of the old guy to the right, yup, that's the Rockies team set. Jamie Moyer, who was designated for assignment by Colorado on May 30th, was then signed, pitched in AAA and was released by the Blue Jays and Orioles and has been without a MLB contract since July 6th is the lone Rockies player in a product released in November. Moyer got two cards in Topps Update, which is fine, a 49 year old winning an MLB game was a good story and worthy of being recognized on cardboard, but that should have been it. Then Moyer got a card in Bowman Chrome for no good reason and now he is the only Rockies in the Heritage update set. Of the 49 players to play for the Rockies this season, Moyer was the first player to be let go by the team making him the the least current player possible for an "update" set.


How about guys like Tyler Colvin who played in 136 games for the the Rockies with 18 home runs, 72 RBI and a .290 average but did not get a card in 2012. D.J. LeMahieu played in 81 games for the Rockies, hitting for a .297 average with solid defense. Maybe one of the "piggyback" relievers like Josh Roenicke who tossed 88 2/3 innings over 63 games, Adam Ottavino who went 5-1 over 53 games or Carlos Torres who pitched in 31 games. Even Andrew Brown, a part timer who hit 5 home runs over 46 games would have been a better Rockies representative than Jamie Moyer. None of these players got cards, but Jamie Moyer gets 4 base cards over 3 sets 5 months after being released.
Posted by Rosenort at 11:14

Email ThisBlogThis!Share to TwitterShare to FacebookShare to Pinterest
Labels: 2012 Topps Heritage, Jamie Moyer, One of Every Rockie, Rockies