Here are the final cards with 6 of the 7 being from Upper Deck, in fact cards 2-9 are all Upper Deck releases. I expected UD to have a strong showing, but am a little surprised there was not more Score. 13 of the 30 are Horizontal cards, which I have to agree give better photos, but look like crap in binders. Feel free to leave comments on cards that I might have missed or cards that are to high or low, I would like to come back to this at some point so I will be keeping track and adding to the list and any help or feedback is greatly appreciated. 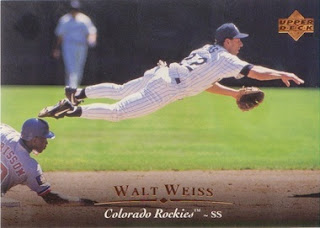 7. Walt Weiss - 1995 Upper Deck #413
The Rockies new manager and the second 1995 Upper Deck on the list. Just a great photo with a set that focuses on the photo. Bonus points for an Expo sighting. 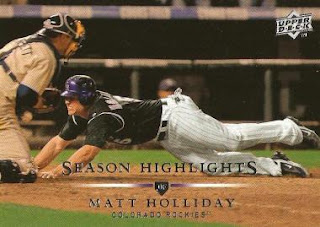 6. Matt Holliday - 2008 Upper Deck #396
The slide from game 163, Matt Holliday scoring the winning run on a walk-off sacrifice fly by Jamey Carroll. This run send the Rockies to the playoff for the first time since 1995. 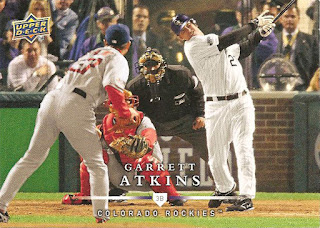 5. Garrett Atkins - 2008 Upper Deck First Edition #350 or (2008 UD #484)
There were not a lot of cards that highlighted the Rockies World Series run of 2007, the Holliday card above is technically from a regular season game. Not much went right for the Rockies in the 2007 World Series, but this card shows Atkins hitting a home run off Hideki Okajima in the 8th inning of Game 4. 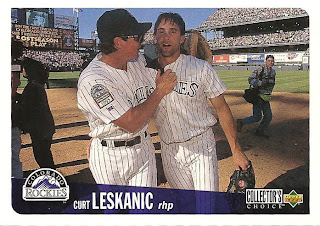 4. Curtis Leskanic - 1996 Collector's Choice # 537
From the same game as the Galarraga card that came in at #12, the 1995 Rockies actually had a strong bullpen with Leskanic, Darren Holmes and Steve Reed. Holmes and Leskanic shared the closer role and Leskanic closed out this game sending the Rockies to the playoffs. The Postseason Play on the scoreboard in the background really adds to the card as Leskanic gets congratulated by possibly Matt Nokes, I am not sure on that one. 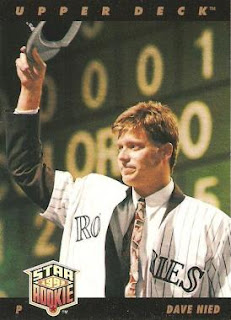 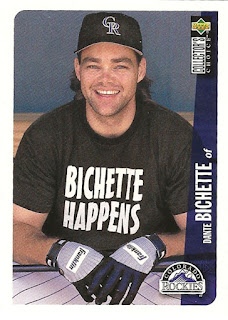 2. Dante Bichette - 1996 Collector's Choice #135
Dante became a fan favorite in 1995, finishing second in the MVP race with a .340 average, 40 home runs and 128 RBI in a strike shortened season leading the Rockies to the playoffs. These are the kind of photos that Upper Deck was known for, something different from the standard baseball shots. Bichette had a good career averaging 29 home runs and 118 RBI with a .316 average over 7 seasons with the Rockies, but his bad defense and lack of walks hurt his value. 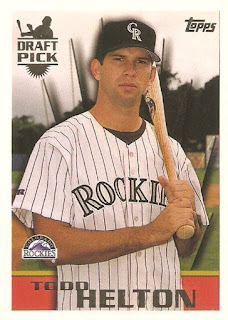 1. Todd Helton - 1996 Topps #13
Breaking my own rules by having a boring posed photo at the top, but who else but Todd Helton could be in this spot. The Rockies all-time leader in pretty much everything, not a rookie card, but the first card in a Rockies uniform.
Posted by Rosenort at 10:23