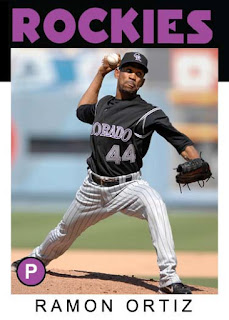 Being surrounded by Blue Jays fans I end up paying more attention to the Toronto Baseball Club than I really need to. This weekend 40 year old Ramon Ortiz left the mound in tears after suffering an elbow injury that could end his career. Ortiz is probably best know for his time with the Angels were he won at least 13 games three seasons in a row and was the winning pitcher in Game 3 of the 2002 World Series earning himself a World Series ring. While his Rockies career lasted 10 games in late 2007, he earned his only win with the club in game 163, retiring all three batters he faced in the 13th inning. The Rockies would then score 3 runs in the 13th to win the game and earn their first playoff appearance since 1995 and make it to the World Series. His career took some strange turns after 2007, spending 2008 in Japan and 2009 in AAA. He would return to the majors in 2010 with the Dodgers and 2011 with the Cubs, spent 2012 in AAA before pitching with the Blue Jays in 2013.
Posted by Rosenort at 11:42