Thoughts on Topps changes for 2015 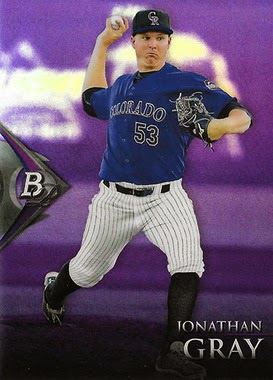 Topps recently announced some changes to the baseball line-up for the 2015 season, nothing really huge to most people, but the fact they discontinued one of the few brand I really liked in Bowman Platinum was pretty disappointing, so I am just going to over what changed and what I think as a collector.

Say good-bye to Bowman Platinum - Debuting in 2010, for me Bowman Platinum has consistently been the best Bowman brand as far as design goes (other than maybe Inception), and I personally thought that 2014 was the best of the bunch. While I never broke a tone of Platinum, I always picked up singles and participated in a few breaks. Where Platinum suffered is the fact that few people care about prospect auto's other than Bowman Chrome and Draft making the box never worth the price-point.

So Long Bowman Sterling - This one makes the most sense, Sterling always one of the ugliest of Topps offering, and the last two years were basically hot garbage. Take into account the sticker auto's and the fact that people are usually still breaking Bowman Draft when Sterling comes out make it a pretty pointless brand. Along with Platinum and Inception, people always focus on Bowman Draft auto's making Sterling pretty much pointless.

Bringing Back Bowman's Best - This one really makes me wonder, Best was around while I was away from the hobby, but there is nothing about the brand that excites me. Really there is nothing that Best can do that would excite people, Bowman Chrome/Draft will remain king as far as prospect autos go and Best will just take Platinums place as another forgettable Bowman brand, maybe Topps will go high-end with it, but would anyone really care about another high-end set to go with Tribute, 5-Star, Museum Collection, and whatever else they release at $100+ a pack.

Bowman Series 2 - This one is the most interesting, although to me Bowman and Bowman Chrome might as well be the same set, adding Series 2 in to the mix might be a little overload. The only thing that would make me care about this set is if it took the place of the Bowman Draft rookie cards that were scrapped last year as it became a prospect only product.

In Summary - Topps did some really cool things last year bringing back Stadium Club and Topps Tek (I was very skeptical of Tek, but Topps did well with that one), but the 2015 changes do nothing for me, losing Platinum is a big minus and Bowman Series 2 will just be more of the same as we already had Bowman, Bowman Chrome and Bowman Draft which will now kind of mirror Topps Flagship, Topps Chrome, Series 2 and Topps Update. Sterling and Best basically cancel each other out, although Best would have to be a dumpster fire to be worse than Sterling, and Heritage High Number is pretty meh. To me the 2015 line-up looks worse that what 2014 was, but there is a lot of time for me to be proven wrong.
Posted by Rosenort at 20:19