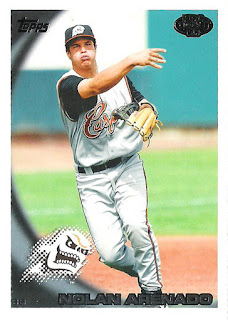 If you followed my Justcommons posts, there was mention of the one card that I actually wanted and was out of stock. This is the card. Nolan Arenado 2010 Topps Pro Debut with the Casper Ghosts. When I think of the Casper Ghosts, I think of the glow in the dark hats more than the prospects that went through. Sadly the awesomely named Casper Ghosts moved to Grand Junction in 2012 and become the boringly named Grand Junction Rockies.
Posted by Rosenort at 16:17