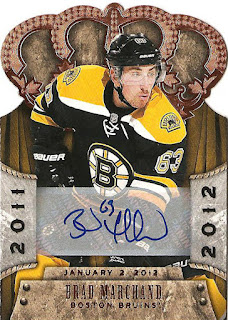 Part of a recently COMC order, 2011-12 Panini Crown Royale Premiere Date Autograph numbered to 99. In his first full season in the NHL Marchand played a big role in the Bruins Stanley Cup season as a player that pretty much everyone but Bruins fans hates. His 11 goals in the playoffs as a rookie is tied with Jeremy Roenick for second all time behind the 14 that Dino Ciccarelli scored in 1981. Marchand starred in the finals scoring 5 goals with 2 assists in Boston wins including 2 goals and an assist in Game 7. His 7 points in the final round was tied for the team lead with Mark Recchi. He might be best remembered for punching one of the Sedins in the face a couple times (gif below)