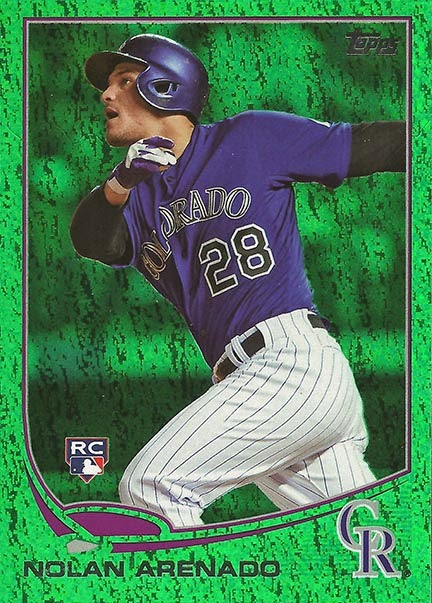 The zistle community seems to be growing rapidly lately which should make trades a little more frequent. Although this one was with hpennington22 who currently holds the record with 86 completed trades. The headliner card being a Emerald parallel of 2013 Topps Update Nolan Arenado.

The 1997 Upper Deck Walt Weiss is a beauty, a nice action shot with the Coors Field scoreboard in the background, and an Expo sighting in future Rockies second baseman Mike Lansing. Another Arenado, this time the Walmart blue parallel, and Brandon Barnes for the "one of every Rockies collection".

While not collecting the whole 2014 "Future is Now" set, I will always try to add a nice Jose Fernandez card. I had honestly forgot why Michael Crouse was on my wantlist, but a quick google reminded me he was a part of the Canadian team that won the Gold medal at the 2011 Pan-Am Games, Canada's only international gold in baseball. Stemming from my love of 1971 Topps, Nolan Ryan in a Mets uni is a must have. While the Rockies don't look great in the "Raining Blood" Red Hot Foil parallels, Iannetta with the Angels works as well as any team.

Another Expos sighting with Gary Carter from 1992 Pinnacle.